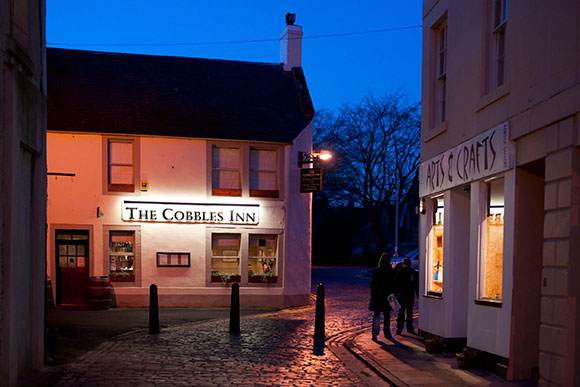 The Kelso Folk and Live Music Club’s home for the last decade or two has been The Cobbles Inn on Bowmont Street, off the market square. Changes in staffing and opening hours during Covid mean our old late Friday night pub session is, for the moment, no more.

Because The Cobbles Inn is a restaurant, children are welcome. It is a safe environment with a friendly atmosphere.  The video below is how it used to be in the main bar of the Cobbles. As things change, and we welcome new faces, public bar sessions may be resumed at one of more of the other pubs in the town centre.

Other Sessions and Guest Nights

The club will, from time to time, organise sessions on another weekday night. These will be publicised to members/regulars. There are now regular Wednesday night and occasional Sunday afternoon sessions at The Cobbles, anchored by local musicians and open to all. We also meet informally outside Rutherford’s micro pub.

The club was started in 1995 when a Perthshire fiddle player arrived to work at Plexus and discovered no sessions were happening in the town. Mike Mustard, who has long since departed for England, advertised a meeting to set one up and it has grown on a weekly basis ever since.

The club was formally constituted in at the turn of the millennium when three years of sponsored ‘Seasons of Sessions’ brought in funds, donated by the members who anchored sessions round the Borders. These in turn enabled the first Kelso Free Folk Festival in 2003, supported by a council grant.

Since then the club has been self-supporting with a programme of visiting guest concerts, a regular weekly open mic and late night session, and frequent contributions to the cultural life of Kelso by taking part in events. An annual Festival was started in 2017 and is set to run for the foreseeable future. One notable earlier event was the club’s (second) 2008 Burns Supper

To let our organisers know if you are planning to come along as a new musician, singer or just to listen email kelsoflmc@gmail.com

This website uses cookies to improve your experience while you navigate through the website. Out of these, the cookies that are categorized as necessary are stored on your browser as they are essential for the working of basic functionalities of the website. We also use third-party cookies that help us analyze and understand how you use this website. These cookies will be stored in your browser only with your consent. You also have the option to opt-out of these cookies. But opting out of some of these cookies may affect your browsing experience.
Necessary Always Enabled
Necessary cookies are absolutely essential for the website to function properly. This category only includes cookies that ensures basic functionalities and security features of the website. These cookies do not store any personal information.
Non-necessary
Any cookies that may not be particularly necessary for the website to function and is used specifically to collect user personal data via analytics, ads, other embedded contents are termed as non-necessary cookies. It is mandatory to procure user consent prior to running these cookies on your website.
SAVE & ACCEPT